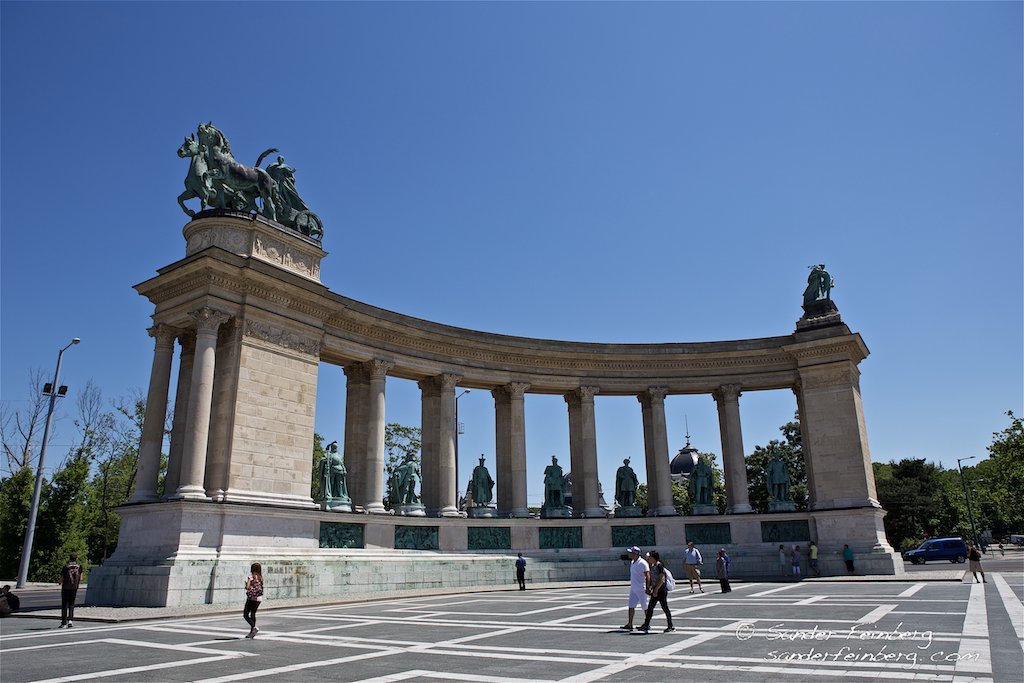 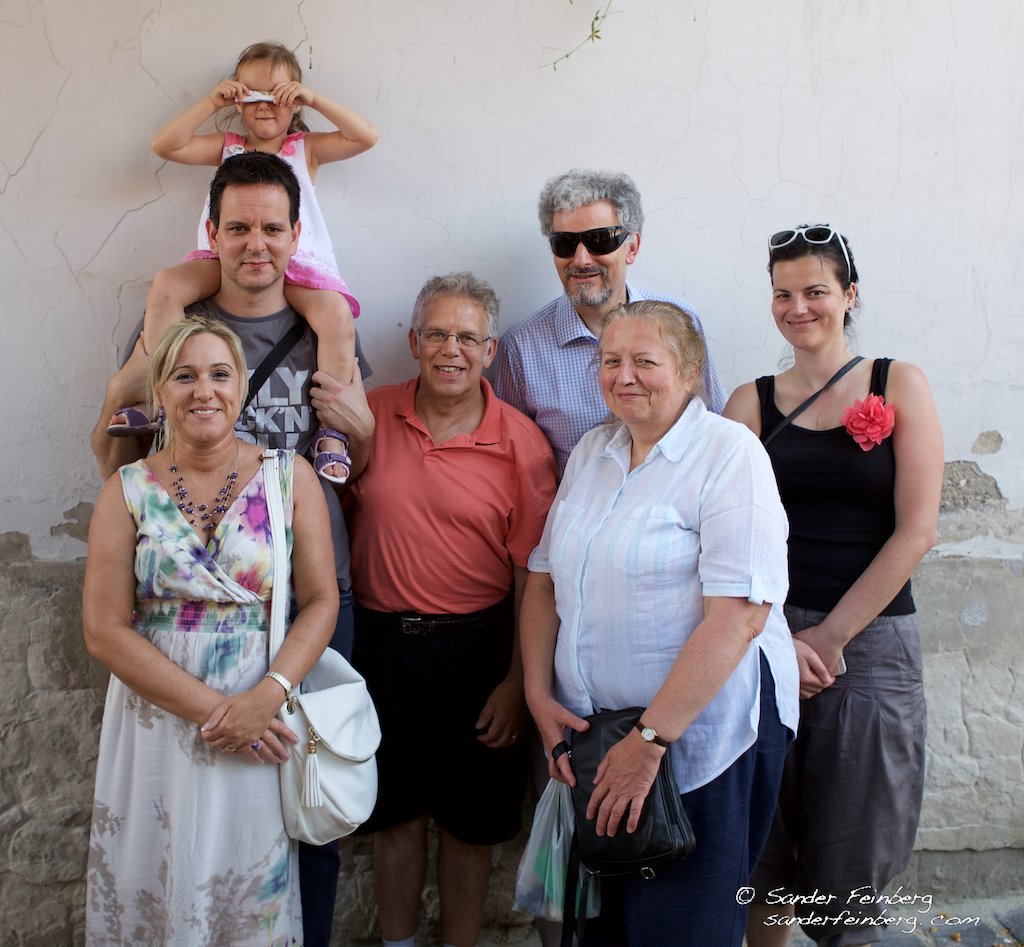 In June, 2015 Amethyst and I were blessed with almost ten days in our friends’ apartment in Rome, Italy. On one of the weekends I got a really inexpensive flight on RyanAir and Wizzair to Budapest to visit my cousins, the Földi family. We packed in a lot of sightseeing, great meals and wonderful conversations. Thankfully for me, everyone speaks fluent English. I am working on my Hungarian but my vocabulary is about equal to a two year old! 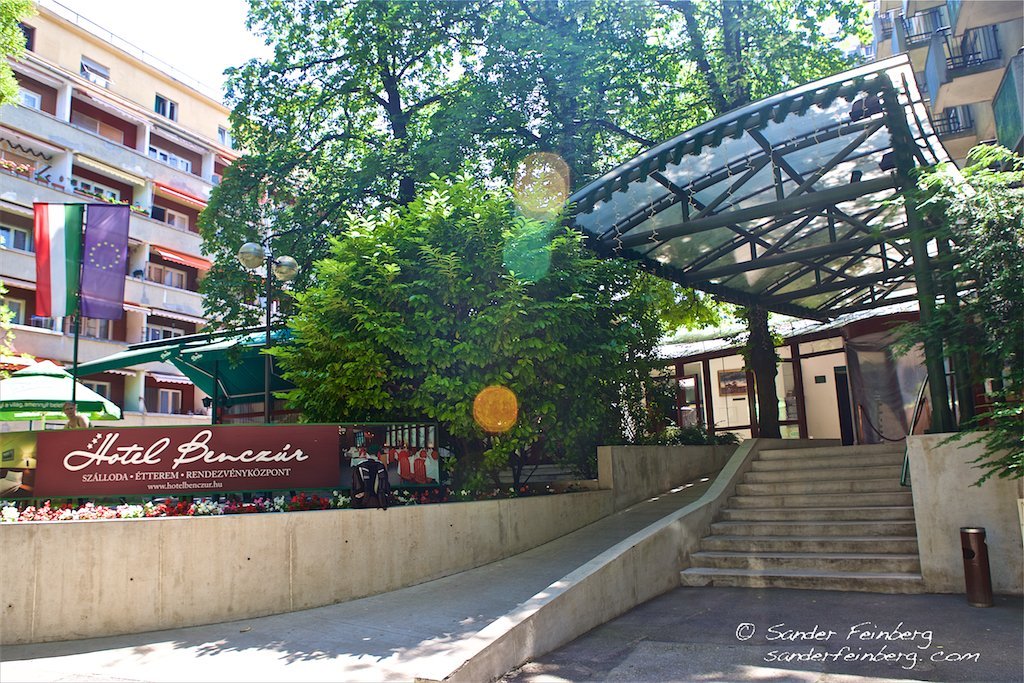 I stayed at the very nice Hotel Benczúr. It was on a lovely tree lined street in an area with several embassies and very close to the City Park you will read about below.

On the first day of my visit, the entire family met at a lovely restaurant called Csalanosi Csarda in an area called Obuda. “Óbuda was a city in Hungary that was merged with Buda and Pest on 1 January 1873; it now forms part of District III-Óbuda-Békásmegyer of Budapest. The name means Old Buda in Hungarian.”

Below is a photo of the restaurant and two of the Main Square and Town Hall. I felt like I was in turn of the century Budapest. And, by the way, the food was wonderful and the portions were enormous. My plate could have served three people!

On Saturday, Zoltán and Mónika and their little girl Hanna picked me up from my hotel which happened to be very close to Heroes’ Square It is “is one of the major squares in Budapest, Hungary, noted for its iconic statue complex featuring the Seven Chieftains of the Magyars and other important national leaders, as well as the Tomb of the Unknown Soldier.”

Adjacent to Heroes’ Square is City Park which is over 300 acres and was established in the early 1700’s. City Park is filled with interesting architecture, history and statues. Here is a small gallery. Please enlarge to full screen to see the beauty of the park. And then read the story of two unusual statues.

The history is that the American-Hungarian Federation erected this statue in 1906.

“In 1906, several hundred Hungarian-Americans and over 30,000 Hungarians attended the unveiling on September 16th led by AHF’s first President, Kohányi Tihamér. Thousands lined the streets to watch the parade through Budapest as the “Stars and Stripes and the Hungarian colors intertwined were to be seen everywhere.” 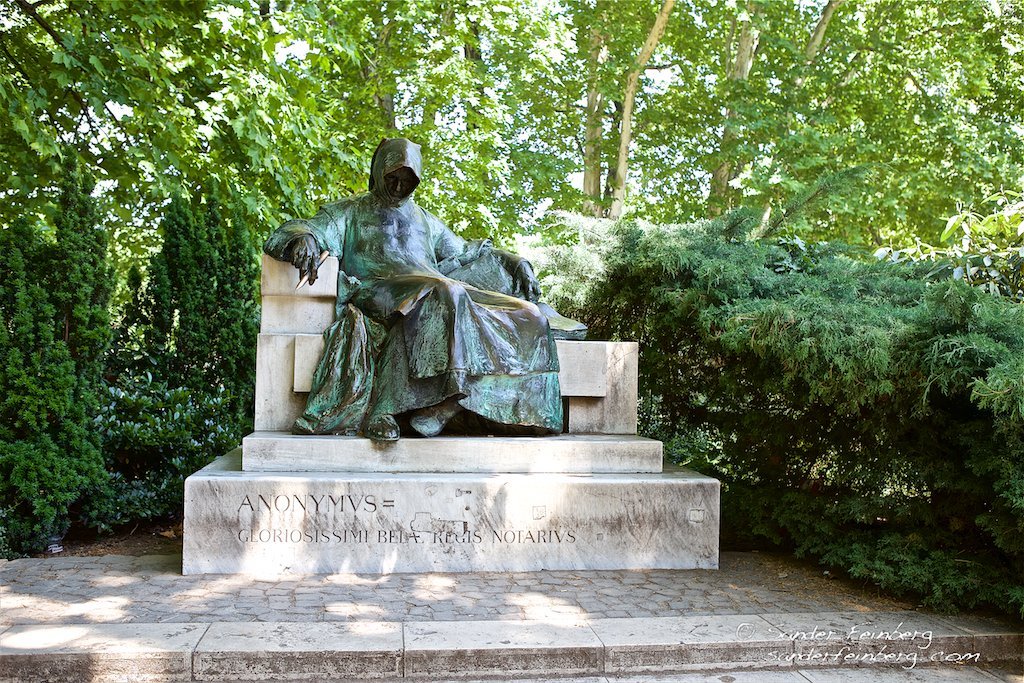 “Anonymous was a 13th Century writer who chronicled the early history of the Hunnic-Magyar people. His face is hidden and to this day no one really know who he was… Most of Anonymous’ early works have been lost, but his most famous work called “Deeds of the Hungarians” (Gesta Hungarorum), still exists today. Although they don’t know who he was, they know that he wrote in Latin, was schooled in Paris, and served in the Hungarian Royal Court in the late 1100’s.” [Slightly edited by Sander for clarity!]

I knew there was a statue of Bela somewhere in City Park , but hadn’t found it in our previous trips. I was so wonderfully surprised to find it on the side of the Vajdahunyad Castle. As you might know Bela was a close friend of my grandfather, Kalman Marki and I am writing a book which contains a lot of new information about their relationship as actors and as political activists. You can find out more about my book here. Thanks to Zoltán for recording this personal moment for me!

in June, 2016 my cousin Zoltan discovered the name of the sculptor. Here is the story.

Saturday night, Mónika and Zoltán took me on a whirlwind tour of a section of the Jewish Quarter.

That’s the beautiful couple in the photo below at a terrific middle eastern restaurant. Gozsdu Udvar is now a high energy courtyard filled with shops and restaurants. During World War II the Gozsdu Courtyard was a part of the Budapest ghetto; it is now a UNESCO World Heritage site.

I was surprised at the thousands of young people on the streets, partying and enjoying the beautiful weather. Take a look at the huge lighted ferris wheel we passed in the park. We sipped Pálinka, a traditional Hungarian fruit brandy with quite a kick! Amethyst and I enjoyed it on our first trip to Hungary in 2007. It is hard to find in the U.S. More on Pálinka later in the story. 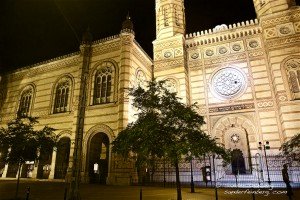 Later Saturday night, We walked by the beautiful Dohány Street Synagogue. “It is the largest synagogue in Europe and one of the largest in the world. It seats 3,000 people and is a centre of Neolog Judaism. The synagogue was built between 1854 and 1859 in the Moorish Revival style, with the decoration based chiefly on Islamic models from North Africa and medieval Spain (the Alhambra). The synagogue’s Viennese architect, Ludwig Förster, believed that no distinctively Jewish architecture could be identified, and thus chose “architectural forms that have been used by oriental ethnic groups that are related to the Israelite people, and in particular the Arabs”. Wiki 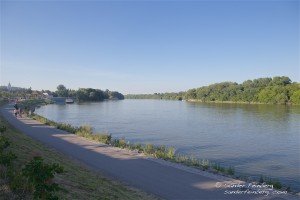 On Sunday, most of the family met again in Szentendre where we wandered about in the heat, had a great lunch, and of course some ice cream.

“This charming little town, whose name means “Saint Andrew”, is known for its well-preserved houses and churches. The location was largely uninhabited until the arrival of Hungarians in the X century, but had been entirely depopulated during the Ottoman conquest of Hungary in the XVI century.” WikiTravel 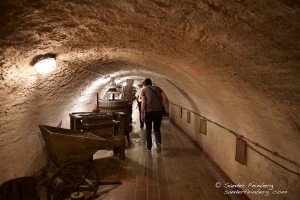 When I mentioned to Zoltán that I would love to sample some high quality Pálinka, he said “Come with me.” We went into a small doorway then when down several levels of stone steps. As we descended, the temperature went down many degrees. When we got to the bottom we were in a wonderful room with shelves holding all kinds of Pálinka. I bought a small bottle back to Rome to share with Amethyst. It was delicious!