I am writing a book which contains two chapters about Sárospatak:
(1) early history prior to the 1930s (2) World War II and its aftermath.

If you are interested in finding out when it is published, please sign up for my newsletter.

And if you have any stories or photographs about Sárospatak, please email me.

Our Visit to Sárospatak in 2007

From our research we knew that there was an old Jewish cemetery in Sárospatak. However, it seemed no one knew where it was.

Our hotel called the visitors’ bureau and the mayor’s office and found its location on the map. So we set out on a long walk and ended up in the middle of a field. We turned around and walked back to a neighborhood where we met a local family. The daughter spoke perfect English and found out from her father that the cemetery was behind the bus stop we had passed three times!

The eight foot tall, rusty iron gate was open. We went inside to find two German workmen valiantly attempting to restore the cemetery from decades of neglect and vandalism. Weeds, dirt, broken headstones were everywhere.

Amethyst and I had a deep emotional reaction to this place filled with memories, suffering, joy and history. We decided that we needed to both document its current state and find some way to participate in its healing. The story of the healing will be told another time.

I would love to hear your family history as it pertains to Sárospatak as well as see any pictures from Sárospatak you can email me. Thank you for your cooperation and interest. If you have any questions, please email me.

Some of you may have already read this web page from a few years back chronicling the visit Amethyst and I and made to the Jewish cemetery in the village of Sárospatak, Hungary where my grandfather was born. We took photos of all the headstones and then with the help of several wonderful people (including my cousin Ervin Földi) they were translated from Hebrew and Hungarian into English. Since then I have received many inquiries from around the world from relatives of those who lived and died in Sárospatak. The story of Sarospatak is tragic: of over 1,000 Jewish residents only 200 survived the Holocaust. Most of the survivors emigrated to Israel.

This morning I received an email on behalf of website of the Chief Rabbi of the Netherlands, Benjamin Jacobs, asking if they could include a photo from the cemetery in an article he had written. The article is no longer online but here is a poor Google translation of the original Dutch.

“A few months ago I was in northern Hungary, in a place called Sárostapak. There is a large university that educates the Ministry. I was invited to give a series of lectures there and was accompanied by a pastor from the Netherlands, the director of Christians for Israel, and a representative of Christians for Israel from Vienna. The visit was aimed “against anti-Semitism” and was a painful failure. I will spare you the details.

I wanted, for lack of a better use of my time, to pay a visit to the Jewish cemetery in the town, the evening before, and then it happened: four of us visited a large Jewish cemetery in the city center. It was freezing cold, oppressive dark, very late and everything was locked. But there was at one of the gates a filthy piece of paper with a phone number.

We called and actually got someone on the line with the result that within 10 minutes, a Jewish man came. It seemed as if he had stepped. straight from the musical Anatevka Boots, a beard, a kippah, tzitzit, yiddish speaking and full of kindness. Before he opened the cemetery for us we had to visit a building. It turned out to be a synagogue where a mikvah, sleeping quarters, kitchen … once had been here. A large Jewish community was massacred here. He was the only Jew who was now living here. He managed the cemetery where many come to pray at the tomb of a famous rabbi who was buried here.

That encounter was so warm in the freezing cold and biting, in the dead of night, I will never forget. And my non-Jewish companions can not remove that evening from their memory. What an almost divine power went out to this man and his history! Our trip was unsuccessful yet elevated to an impressive success, a source of inspiration!”

Images from our 2007 Sarospatak Cemetery Visit 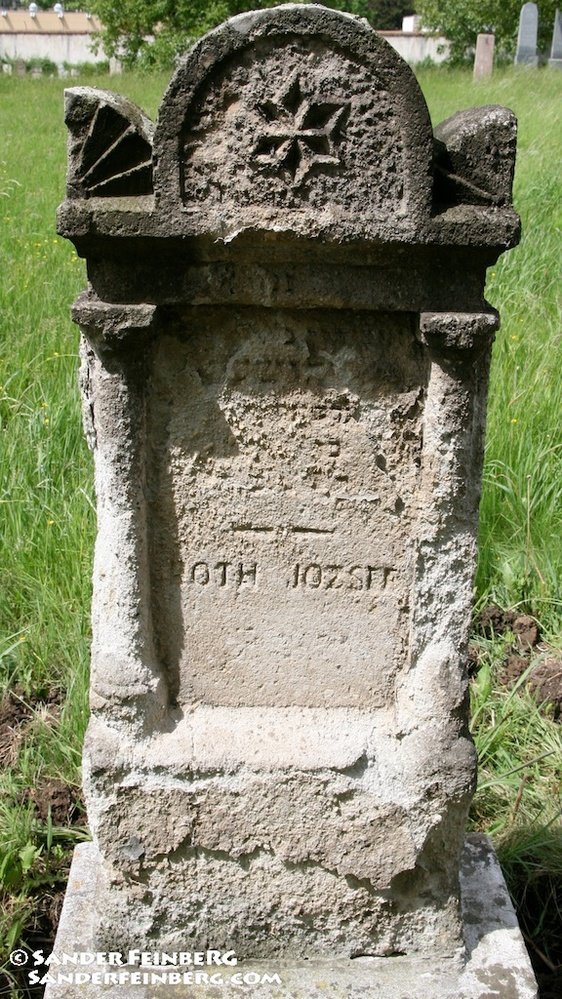 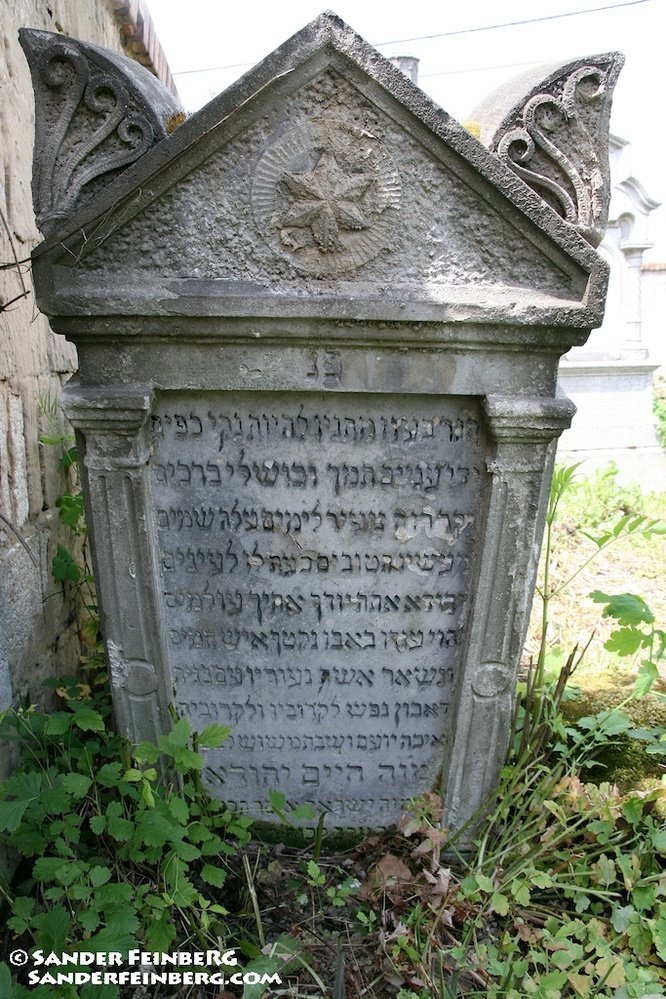 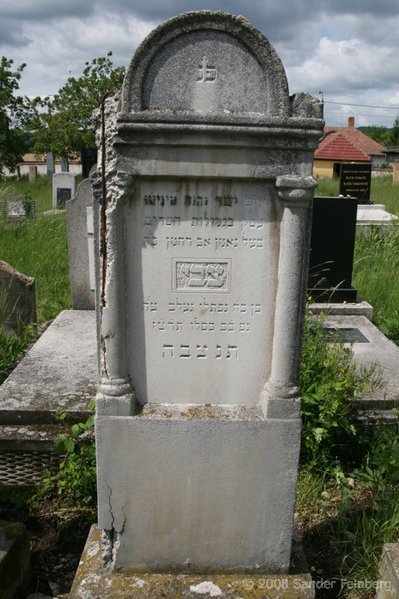 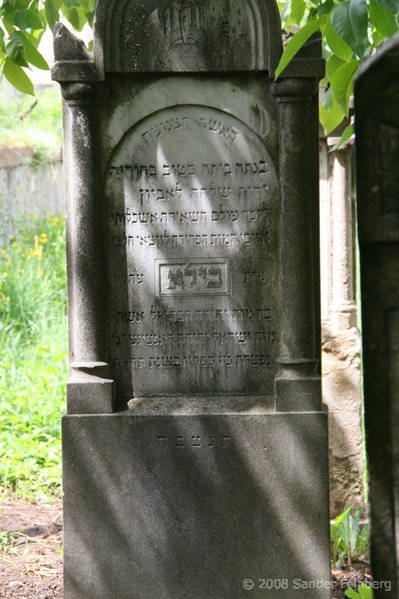 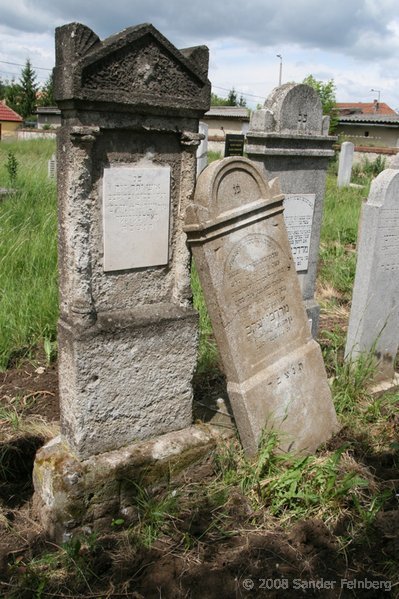 A few of the headstones we found are in the gallery below. We have pictures of 188 headstones however I cannot send anyone all the photos since they are 750MB. Through the generous donation of time of David Rosen, Larry Schwartz, my cousin Ervin Foldi, and Dov Paneth we have an English translation of all the legible headstones from the Hebrew and Hungarian inscriptions. We now also have all the dates translated from Hebrew to Gregorian Calendar. I can send you individual images if you follow these steps:

Sárospatak, Hungary Jewish Cemetery Images by Sander Feinberg are licensed under a

Note: You may need to right-click and select “SAVE LINK AS” from the menu to download.

How to find the cemetery in Sárospatak

The cemetery is located at 47 Arany János Way, Sárospatak, Sárospataki, Borsod-Abauj-Zemplen, between Komaromi Janos St & Bessenyei Gyorgi St. The main highway #37 is the yellow line at the top of the map. Click the thumbnail to see a large map.

Are there other records?

The only information I have is in the Excel file containing the list of headstones. The file includes English translations of readable inscriptions.

I have been told there are municipal archives which require an in-person visit. I do not have any information on how to obtain them. If you find out, please contact me.